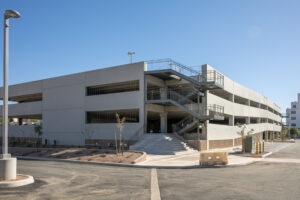 “This is a great accomplishment for our team on this project as well as visitors to downtown Tucson,” said Ian McDowell, Sundt’s Vice President and Tucson Regional Director. “The hard work and dedication of the entire project team are commendable.”

The new vertical precast concrete parking structure adds 392 parking spaces for the convention center, on what used to be a single lot along Cushing St. Sundt+Concord’s project team completed the structure a week ahead of expected completion. The project also included site improvements along Church Avenue. Swaim Associates served as the architect on the project.

Inside the TCC, Sundt+Concord is wrapping up renovating and expanding the main ballroom, south exhibition hall, adding meeting rooms, restrooms and lobbies. The project team will also add a parking structure with 524 spaces located along Granada Ave northwest of the Leo Rich Theatre. The upgrades will support conventions of many sizes, and technology upgrades to the 50-year-old building will support in-person, virtual or hybrid events. The project’s schedule accelerated during the pandemic while the facility had been closed for events.

Sundt+Concord is also restoring the historic plaza on the TCC campus to its original state. Initially constructed in two stages in 1971 and 1973, it is the only Garrett Eckbo-designed civic landscape in Arizona. New trees, irrigation and restored bricks are part of the enhancements.  The entire improvement project is scheduled for completion in January 2022 before the annual Gem and Mineral Show.

This landmark project marks the fifth time Sundt Construction will have worked on the TCC campus since initially constructing the facility in the 1970s. It also marks the sixth time the Rio Nuevo board, Tucson’s downtown financial district, selected Sundt to perform construction services for its projects.

Sundt opened its Tucson office in 1929. In the decades since, it has built notable landmarks across the Old Pueblo. The company is currently working on the UA’s Student Success District, the Monastery and the I-10 – Ruthrauff interchange.  Sundt recently completed the award-winning  Banner-University Medical Center Tucson’s new tower and the I-10 – Ina Interchange. The company continually ranks in the top five of ENR Southwest’s Top Contractors.

Sundt Construction, Inc. (www.sundt.com) is one of the country’s largest and most respected general contractors. The 131-year-old firm specializes in transportation, industrial, building, concrete and renewable power work and is owned entirely by its approximately 2,000-plus employees. Sundt is distinguished by its diverse capabilities and experience, unique employee-ownership culture and depth of self-perform expertise in nine major trades. Much of Sundt’s workforce is comprised of skilled craft professionals who, together with the company’s administrative employees, enable Sundt to fulfill its mission to be the most skilled builder in America. Sundt has 11 offices throughout California, Arizona, Texas and Utah and is currently ranked the country’s 52nd largest construction company by ENR, the industry’s principal trade magazine.