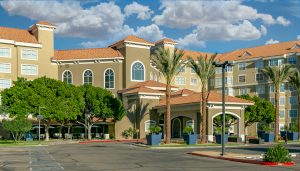 The project was performed in phases over two years to accommodate the over 300 residents and 100 staff members living and working in the construction zone. The first phase, which lasted one year, included renovations of all corridors in the existing six-story residence towers. The corridor project was awarded first place and Best in Show at the 2018 American Society of Interior Designers (ASID) awards in Phoenix.

“We’re very proud of this project. We worked hard to build a culture of keeping everyone safe and keeping residents informed of what was going on and when,” said Tucker Macon, Sundt’s Project Director. “I couldn’t go on the project site without having a resident come up to me to tell me what a great team we have.”

“Sundt did a phenomenal job on this project working closely with many members of our Sun Health team,” said Sharon Grambow, chief operating officer for Sun Health Communities. “They worked for two years while residents lived here, and staff worked here, and they became like family. Grandview Terrace has always been our flagship Sun Health community and now we feel we are set for the future.”

Sundt Construction, Inc. (www.sundt.com) is one of the country’s largest and most respected general contractors. The 129-year-old firm specializes in transportation, industrial, building and concrete work and is known for its commitment to quality and innovative approach to construction services. Sundt has 11 offices throughout Arizona, California, Texas and Utah and is 100-percent owned by its approximately 2,000 employees. Sundt currently is ranked the 65th largest construction company in the United States by ENR, the industry’s principal trade magazine. The company is consistently ranked among the Best Places to Work by business publications in multiple cities, and it was named the nation’s safest construction company by the Associated General Contractors of America twice in a decade. Sundt’s charitable arm, the Sundt Foundation, recently crossed the $9.2 million mark in donations made to hundreds of nonprofit organizations across the country.

Nonprofit Sun Health boasts more than 50 years of meeting the health care needs of the community, first as a hospital-based system and now as an organization offering philanthropic support, thee Life Plan Communities, a Continuing Care at Home program and a full slate of health and wellness programs. In partnership with Banner Health, Sun Health Foundation serves as the philanthropic link between the community and Banner Boswell and Banner Del E. Webb medical centers as well as the Banner Sun Health Research Institute.