The Bay Area is known for its high price of construction, with San Francisco recently passing New York City as the costliest place to build in the world. Higher material costs, a shrinking pool of skilled labor, and rigorous seismic and environmental requirements are among many factors that make this a demanding place to build. For innovative builders like Sundt, this market has a way of pushing them to do more with less, saving clients money in the process.

At the San Mateo Wastewater Treatment Plant (WWTP) expansion project, Sundt’s Industrial Group is building new headworks, primary and secondary treatment facilities. The upgrades will allow the city to meet current and future water discharge regulations, benefit ratepayers and protect surrounding waterways. Because of its scale and complexity, the 166,000-square-foot, $432 million project is being built in three phases over five years.

Phase I, site excavation and existing plant improvements, was completed in Fall 2020. Phase II, installation of remaining precast piles to complete all foundations, is nearly complete. Phase III kicked off in January 2021 and involves vertical construction of the new WWTP facilities and the attached administration building, as well as improvements to the existing WWTP site.

Long before construction started, however, employee-owners were “getting their hands dirty” as the preconstruction team addressed the site’s silty, clay-heavy soil known locally as “bay mud.” The best approach, as they would discover, involved extensive dewatering and soil-cement shoring wall around the mass excavation of the entire site. “We basically created a giant bathtub around the site to keep water out. A significant amount of forethought and engineering went into this approach,” said Industrial Group Operations Manager Rob Infantino.

Just as significant was the digging, hauling, shoring and concrete work that Sundt averted—and the money this decision saved—by modifying the project’s initial design. “The more you have to haul off and back-fill, the faster things add up,” said Rob. Bay Area trucking costs are higher. Places to dump are fewer and have stricter regulations. And, once all of the site work and demo are finished, building materials like concrete have some of the highest costs in the country.

The initial design would have used 56,000 cubic yards of structural concrete, but after exploring different options, the project team brought this down to 31,000 cubic yards. “When you do the math, it’s a large number,” said Rob. “The original design had multiple separate structures. By reducing the project footprint, and consolidating these facilities to be common-wall construction, we saved the client a substantial amount of money—without sacrificing on quality or plant capacity.” 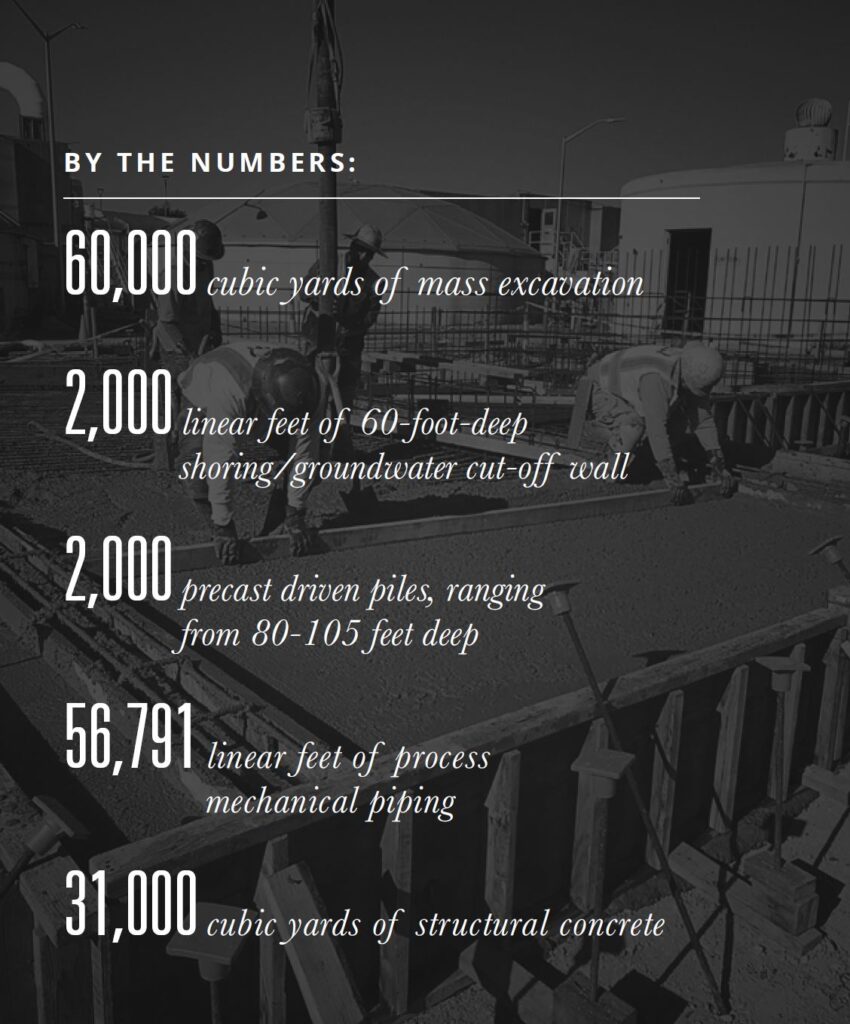 “We’ve overcome many obstacles and still managed to perform to schedule. The team has dealt with contaminated soils, bay mud excavation, a very shallow groundwater table, California Covid protocols, and a few other extra regulations the state has thrown our way. Hats off to the entire project team for persevering and driving results, especially to Construction Manager Mike Vokoun who has kept construction activity moving in a very logical build plan.”
– Doug Lenz, Sr. Project Manager