It’s called the theory of Diffusion of Innovation. When someone decides to try something new, they fall into one of four primary groups: the early adopters, the early majority, the late majority, and the laggards.

Early adopters define themselves by embracing new ideas or methods first. You’ve seen these people around you: they’re the first to experience, purchase or try. They live on the cutting edge. The early majority follows closely behind but will only attempt something if someone else has tried it before. The late majority suffers from the fear of missing out; they don’t want to be seen as someone in the minority. Finally, the laggards adopt something new because there’s no other choice.

Historically the Diffusion of Innovation has taken an exceptional amount of time, one group adopting an innovation after another. When Astro Teller, ‘Captain of Moonshots’ at Alphabet’s X, was interviewed for Thomas Freidman’s Book Thank You for Being Late, he drew the below graph demonstrating the lag between ‘human adaptability’ and ‘technology’ change over time. 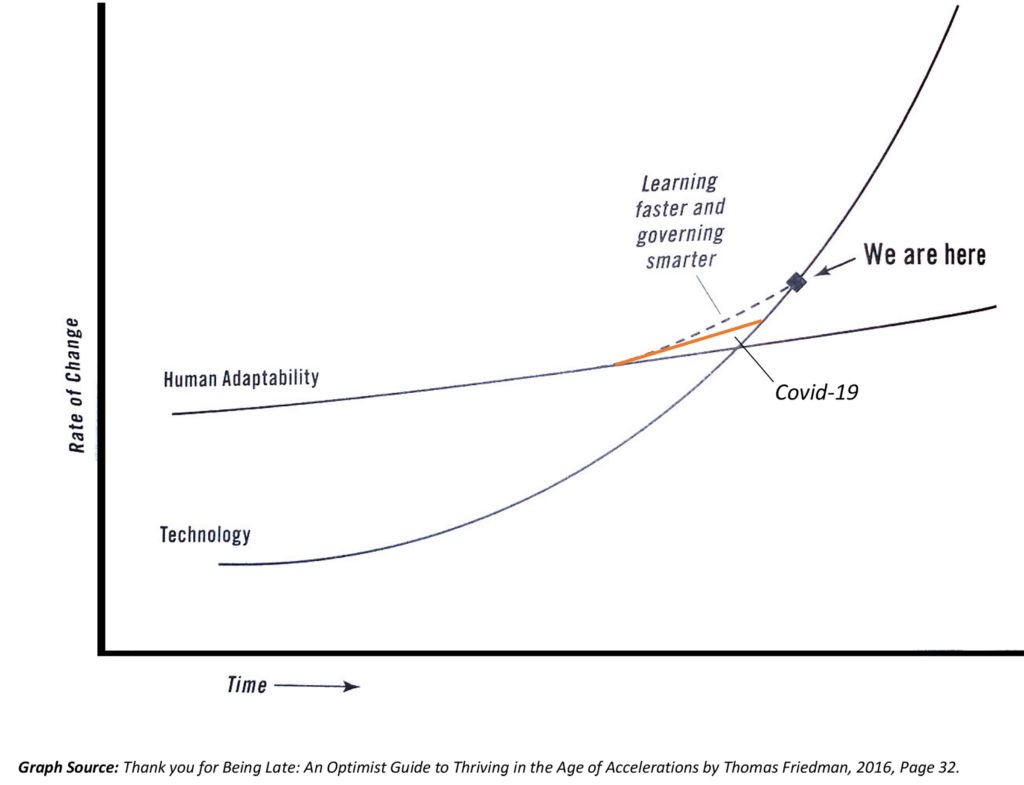 I added the orange line on Mr. Teller’s graph to show a conceptual representation of what COVID-19 has done to accelerate the human adoption of specific technologies. Our society essentially moved through the Diffusion of Innovation at a pace that has never occurred before.

Think about this: Zoom is now a household word. If you didn’t purchase groceries online before, you do now. If you weren’t streaming entertainment already, you probably are now. Historically, these technologies take time, but in a matter of six months, the majority of the world had to adapt at an unprecedented speed in the adoption of numerous data-based products and services to conduct day-to-day business. These data-based services require data centers not only for information storage but also for information aggregation and computation.

Simply put, data centers run the technologies that power today’s global economy. For these facilities, one hundred percent uptime and security are imperative, with zero margin for error. Their components are costly and sophisticated, and like the enterprises that depend on them, they evolve at a breakneck pace.

Sundt’s ability to consistently surmount the high bar set by those factors makes us a contractor of choice for the nation’s most successful companies and essential public services. We succeed through our ability to traverse the orange line on the graph above, understand the requirements for all individual components of a project, and bring those interdependent pieces together in one holistic, robust aggregated solution.

Sundt continues to be an early adopter and adds capabilities to perform data center projects’ most critical milestones. To drastically reduce your time to market, we started running a fleet of our own excavators, scrapers, and dozers to prepare your greenfield site.

To give you certainty in accepting and handling your equipment at the project site, we adopted the in-house ability to place ultra-flat data halls and robust equipment pad concrete. To ensure what’s being built in the factory precisely matches your new facility’s construction, we’ve added numerous capabilities. We use precision modeling, robotic total station layout, augmented reality overlay of every underground utility, equipment attachment points, building system interface and point of data integration.

When industrial water became a significant input in reducing your mechanical energy use, we adopted the ability to install, recycle, and treat this element on your data campus, and have performed these services for many of the nation’s leading technology companies.

We gained the agility and adaptability to dramatically reduce the number of suppliers required for a project throughout our journey. By bringing the right people to the table at every stage of planning and building, we added the ability to modularize major components like heat aisle containment, centralized facilities, further and simplifying the supply chain. We’ve accelerated our Diffusion of Innovation to shorten tight timelines and minimize intersection points where miscommunication and delays existed.

COVID-19 has taught us that data centers and other facilities built for technology have the highest exponential need for future flexibility and expandability. As a post-COVID owner, your Diffusion of Innovation traverses the variables of electricity, water, rack density, data pathway (fiber-optics), climate, equipment supply chain, and several other variables that might have been developed over the next five years. But now it needs to be planned in the next five months.

In Sundt, you have a reliable partner who understands the high bar of functionality, innovation, adaptation, and exponential nature of traversing the orange line added to Teller’s graph. Every project has a challenge; we celebrate solving them. Put your next challenge before us. Whether it be breaking the theory of Diffusion of Innovation or providing certainty of your next project’s outcome, we’re here to help.

If you need a trusted advisor on your next data center project, let’s talk.