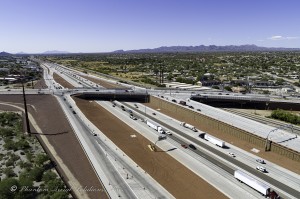 Since January 2017, the joint venture team has worked to elevate the Ina Road interchange, widen I-10 and Ina Road, and replace the existing Santa Cruz River Bridge. The improved infrastructure will help reduce delays and increase safety for the nearly 25,000 drivers who use the interchange every day.

Of the various improvements made, the most notable is the bridge, which will take traffic over the Union Pacific Railroad tracks and break up delays on a heavily used four-lane road. Railroad crossings were previously at street level, causing frequent backups for daily drivers. Now drivers will have safer, faster access to and from the interstate.

Sundt opened its Tucson office in 1929. In the decades since, it has built notable landmarks across the Old Pueblo including nearly 60 buildings on the University of Arizona campus, the 4th Avenue Underpass and most recently the Banner-University Medical Center Tucson’s new tower. The company has three offices in Arizona: Tucson, Tempe and Phoenix.

Sundt Construction, Inc. (www.sundt.com) is one of the country’s largest and most respected general contractors. The 129-year-old firm specializes in building, transportation, industrial and concrete work and is owned entirely by its 2,000+ employees. Sundt is distinguished by its diverse capabilities and experience, unique employee-ownership culture and depth of self-perform expertise in eight major trades. Half of Sundt’s workforce is comprised of skilled craft professionals who, together with the company’s administrative employees, enable Sundt to fulfill its mission to be the most skilled builder in America. Sundt has 11 offices throughout California, Arizona, Texas and Utah and is currently ranked the country’s 54th largest construction company by ENR, the industry’s principal trade magazine.