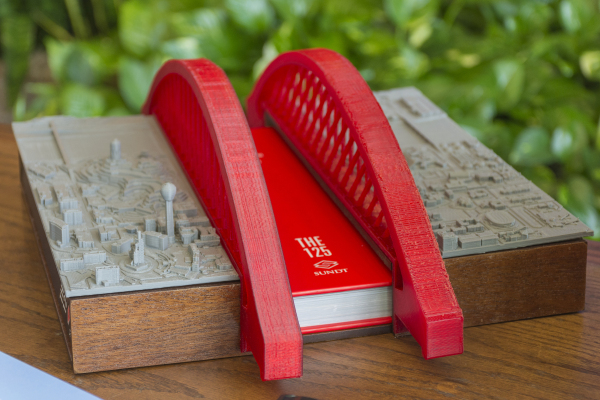 “The 125,” a coffee table book celebrating Sundt’s 125th anniversary and signature projects, cracked the top 10 in this year’s American Institute of Graphic Artists-Arizona competition. Our book placed sixth in voting by AIGA members, all of whom are leaders in the communications and marketing field.

The book was designed by WhyFor, a full-service Phoenix design and marketing firm. University and community college students from Arizona and California helped with the design and won scholarships for their creativity and work. The projects featured were submitted by Sundt’s employee-owners.

The book cover was produced using a 3D printer we purchased and used as a test run on the project. It depicts projects we have completed arranged in a fictional “Sundt City,” including a bridge that connects the two halves of the jacket.

The book is organized by chapters: Precision, Movement, Inspiration, Environment and Beyond. From a lunar launch pad to a linear accelerator, a top-secret embassy in Moscow to a first-of-its-kind bridge in Texas, each story in “The 125” centers around a vision, challenge and creative solution. Many are iconic projects that have transformed communities and shaped skylines, such as Reunion Tower building core in Dallas, Los Alamos National Laboratory in New Mexico and London Bridge in Lake Havasu, Arizona.